ELTEC Elektronik rolls out its CyBox AP 2 with 802.11ac technology for mobile applications - for wireless access to railway or bus networks 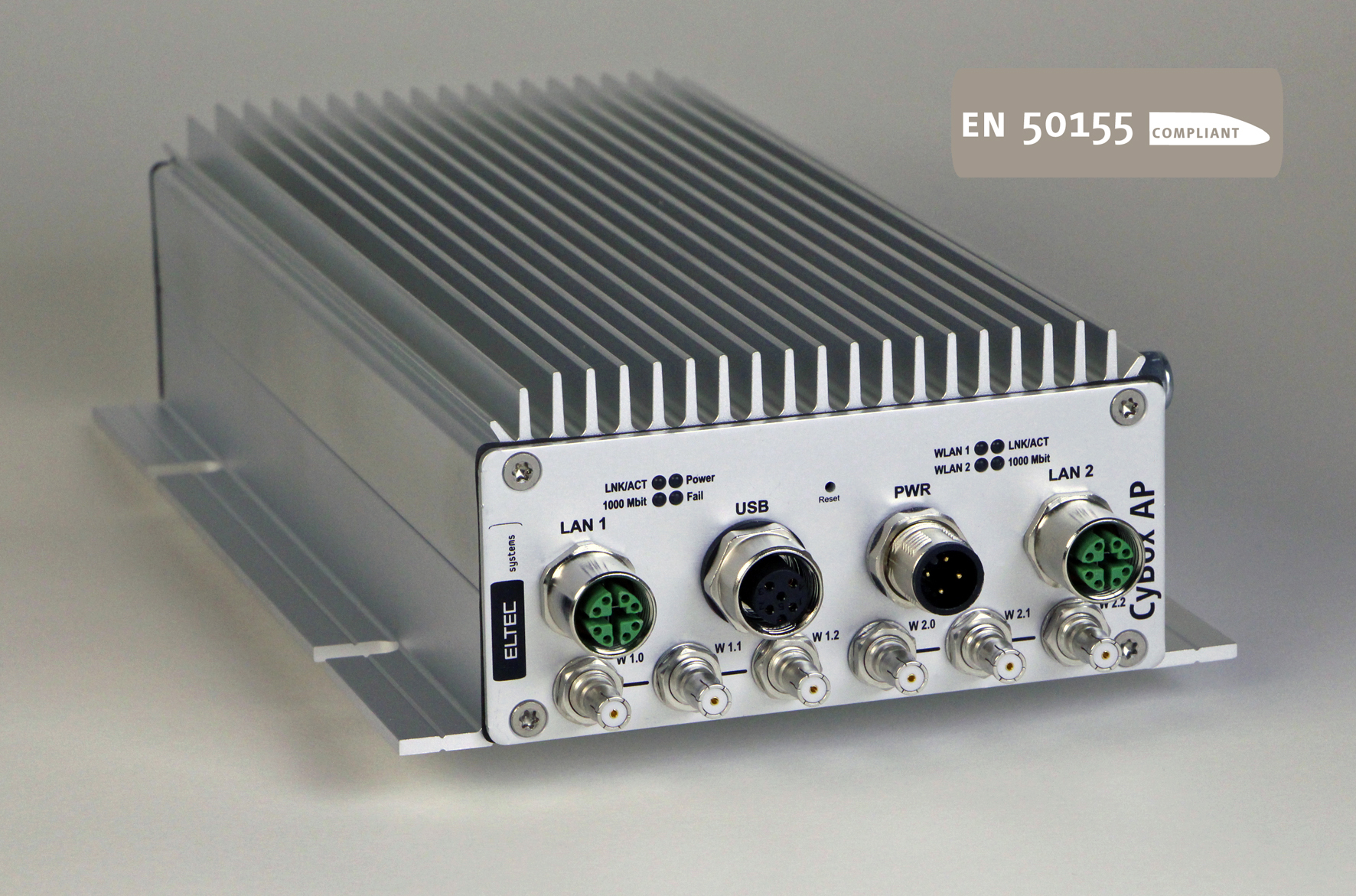 ELTEC rolls out its latest generation of access points with 802.11ac technology

CyBox AP 2 for wireless access to railway or bus networks

At the Embedded World 2016 (Hall 2, Booth 140), ELTEC Elektronik is presenting the CyBox AP2 – the company's newest addition to its family of industrial wireless solutions. The device enables the simultaneous operation of two WLAN radios in the groundbreaking IEEE802.11ac standard with data rates of 2 x 900 Mbit/s. The CyBox AP2 works with a latest generation QorIQ. It offers ample performance reserves to also attain sufficient throughput rates when the WLAN standard evolves further. The installed SoC is equipped with two autonomous Gigabit-Ethernet-MACs, which are both connected to robust M12 jacks. As a result, it is possible to implement highly flexible uplink configurations all the way up to redundancy structures or link aggregation to boost the uplink bandwidth. The bypass relays between the Ethernet ports are very helpful for daisy-chain cabling applications thanks to the fact that even if an access point is switched off, the downstream devices can still be reached.

The new access point supports the maximum data rates of current and future versions of the IEEE802.11ac standard. Consequently, optional versions with a 2.5 GB Ethernet interface as well as a version with a 10 GB optical interface are available. While the first option is optimally compatible with retrofit programs with existing cable connections (CAT 6 or higher), the optical variant addresses primarily new infrastructure. The new access point is mechanically and electrically compatible with its predecessors so that the migration to existing programs can be achieved without any problems.

The sturdy IP3- compliant aluminum housing makes it possible to run the device without a fan at temperatures ranging from -40°C to +70°C (EN50155, Class TX). The design is also highly shock and vibration resistant. It complies with the applicable DIN, EN and IEC industrial standards. The CyBox AP2 power supply is highly flexible. The integrated wide-range power supply is designed for input voltages from 16 Vdc to 154 Vdc and meets all EN50155 requirements. The device covers power interruptions spanning up to 10 ms; making it compatible with EN50155, Class S2. The unit also comes with an additional power supply option – a PoE input (in compliance with IEEE802.3at) for a Class 4 connection. One special functional feature is the option to supply power to a second CyBox AP2 via PoE through a connection on the downlink port. This design makes an expanded radio survey with two access points possible, which requires only one CAT-X cable. This is a cost-cutting feature, especially in conjunction with retrofitting or conversion measures.

The CyBox AP2 weighs just about 1 kg and boasts compact installation dimensions (105 mm x 54.12 mm x 194 mm) combined with a maximum power consumption rating of 20 W. Up to six antennae can be connected via QLS plug-ins.

CyBox APs are wireless access points that have been developed specifically for the rough environmental conditions in railway and automotive applications.
They allow multiple WLAN-enabled devices in a passenger train, bus or on the subway to communicate with the Internet or access local data, such as schedule information, videos, etc. A configurable firewall protects the individual users' private data against unauthorized access and supports the secure and interruption-free data exchange with the Internet. The CyBox APs can be flexibly configured via the convenient user interface or by SNMP commands. Besides setting up global parameters, it is possible to completely configure the WLAN interfaces, including channel selection, SSID, encryption, firewall settings, etc. Existing configurations can also be uploaded and backed up via the USB jack (M12).

« Back to news index